JCVFD was established in 1949. George Byars, one of our current members, was a founding member and prepared the following history of the department.

In his "History of Johnson City Lodge 561 AF&AM", privately printed in 1920 or 1921, Brother L.G. Goar says of Johnson City, "The town is small having a population of 500. It has had no growth in the past ten years. One cause of this condition is that a series of very disastrous fires have occurred in town during the past few years, . ." (p.1).

The community did not take any steps toward incorporating the town until after World War II had ended. The young men returning home to Blanco immediately formed a VFD, but it took more "very disastrous fires" to move the Johnson City community to take action. In late 1944 the Elementary School, once the High School that Lyndon Johnson graduated from in1924, burned (see included photo).

The students had to be farmed out to available Church Sunday School rooms and to the Exhibit Hall the the County Fair Grounds. In 1947 a movement was started to incorporate the town and pass a bond issue to install a sewerage system and a water system. Jimmie Leonard was elected as first Mayor. On the last day of the year in 1948 another "very disastrous fire" consumed the Fawcett Drug Store, Dr. James Bauerle's dentist's office, Johnson City Lodge 561 AF&AM and the Blanco County Supply hardware store (see attached photo).

The alarm system that was in place at this time was based on the telephone operator causing whistles to blow, bells to ring, horns to honk, or other loud noises to alert the citizens to call in and get directions from the operator. The operator also knew who else to call, such as the Sheriff, Constable or the owners of the stores involved. Also on this night the operator called Blanco, Marble Falls and Fredericksburg VFD's for help. The Blanco truck broke an axle and dropped out, but the other two continued on and by drafting out of Town Creek and Cox's Pond protected the exposed buildings to the North.

Picture (post card) of the ruins of the downtown Johnson City fire of December 31st, 1948.

Destroyed the hardware store on the corner, Fawcett's Drug Store next door, and upstairs Dr James Bauerle's dental office and the Masonic Lodge.

Our little town was hard hit.

After everyone caught their breath the merchants of the town (C of C) and the City of JC sent to the Blanco VFD a fairly substantial check so they could repair their truck. The check was returned to the JC Mayor, George E. Byars Sr, by Aaron Posey, Roy H. Byars, Jimmy Hauck and others of BVFD in a letter which advised that they appreciated the offer, but the repair did not cost very much and that suggested that the City of JC use this money to make a down payment on a fire truck and form their own VFD.

A used fire engine was purchased from Fredericksburg VFD (see picture below of restored engine). Soon with training in fire fighting from the surrounding departments the men (and soon women) of JCVFD began to save structures and began moving into the Rescue role . . . automobile accidents, water rescue and others. 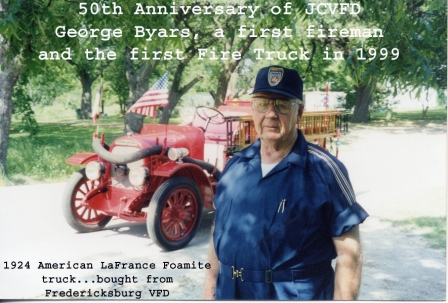 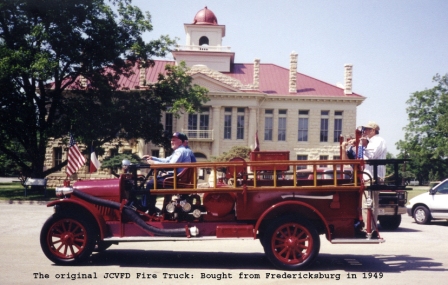 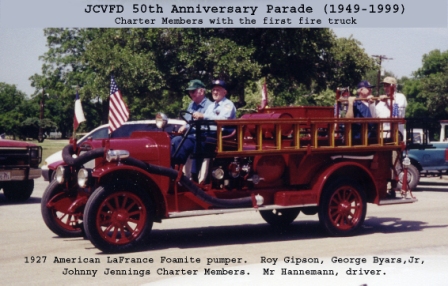 BACK TO TOP OF PAGE    BACK TO HOME PAGE